I don't wanna talk about it

Is Fauré's Les Berceaux more than a message in a bottle from a bygone age? Exploring the role of the narrator to find the song's relevance for today's audience.

It's 2013. I'm sat in a cafe in Covent Garden enjoying a well frothed latte. An actress, sitting comfortably in her sixties and wearing a violent pink jumper, looks up from the script she's been thumbing through and announces to her friend, "I've never met an honest man in my life." She pauses for dramatic effect before continuing with her evidence: "Shakespeare said it didn't he: Sigh no more ladies, sigh no more. Men were deceivers ever. One foot on sea and one on shore. To one thing constant never." Her comment divides the room. The friend nods in agreement. One man smiles wryly, another shrugs off annoyance. A lady huffs in offence and I think about Fauré's Les Berceaux.

134 years separate the creation of Les Berceaux and the controversial statement in the cafe. During this time women have been liberated, technology has gone digital and the world is easier to navigate. Yet 134 years on and a sexual revolution later, a similar story is still being told. As the cafe's micro-environment proved, many believe this to be an out-dated story. Others will disagree. So the question is, if the story of Les Berceaux no longer fully resonates with today's audience, why do we keep programming it? Indeed, is Les Berceaux the elephant in the corner of the recital room? The answer to this question lies in the storytelling. 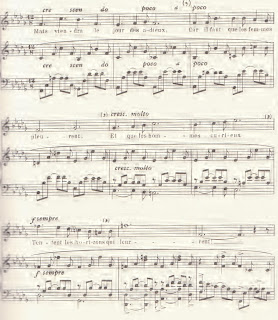 In Fauré's Les Berceaux there is a powerful storytelling connection between the piano and the voice. Both are protagonists in the story. The piano symbolising the sea's promise of new adventure and cyclical fate. The narrator representing someone who has experienced the consequences of the sea's fate. Together they share with the audience the experiences, observations and attitudes of the situation. In essence, they function like a Greek Chorus. Therefore, if the singer and the accompanist do not work as one, and the narrator is not approached from a character point where their thoughts and wants live through the music, the song becomes overly sentimental. When this happens, Les Berceaux is nothing more than an object that we peer at through the thick glass of an exhibition stand. Some may ponder its relevance despite its beauty and be thankful that society has moved on. Others might become irritated about the sentimental portrayal of 19th century gender roles.

But for me, there is more to this song than historical archiving. The message of Les Berceaux isn't tied to its time frame of the nineteenth century because the heart of its message is about betrayal:

Mais viendra le jour des adieux,
But the day of parting will come,

Car il faut que les femmes pleurent,
For it must be that women weep,

Despite the advances of our society, humanity hasn't caught up. Every day, from corporate empires to the street where we live, betrayal continues to turn people's lives upside down. And without doubt, the fears, tears and devastation that it brings hasn't changed across the centuries. Although betrayal is a central theme to this song, it isn't a sad song. It's hopeful, calmly reflective and the final verse is offered as a point of empowerment to the women on the quayside.

Et ce jour-là les grands vaisseaux,
And on that day the large ships,

Par l'âme des lointains berceaux.
By the souls of the distant cradle.

The strength and contentment of the third verse is the interpretative key to this song for it is here where the narrator's wants and values can be found. The narrator tells the women that they have the ultimate power, because the men are emotionally and biologically connected to the child which the women have given birth to and nurture. From a 21st century woman's viewpoint, this doesn't sound much like empowerment. But for me, there's more to verse three than just helping women be happy with their lot. In the first presentation of "par l'âme des lointains berceaux", the cyclical sea pattern in the piano continues, but the narrator's melody liberates itself and rides the wave. The second presentation of this line is resolute, almost presentiment like. Is this a suggestion that the tide will soon change for women? Is this a girl power moment from the nineteenth century?

As the pink jumper wearing lady in the cafe proved as she quoted from Shakespeare, betrayal is both universal and a time-traveller. The rich interpretative opportunities of verse three also opens up the song for new storytelling approaches.  For these reasons, Les Berceaux isn't the elephant in the recital room if it is approached from a storytelling perspective.

As all good stories are the answer to a good question, ask three simple questions to decode the song's subtext and find its storytelling perspective:

Then get down and dirty building the narrator's world with the pianist.