The Art of Femininity 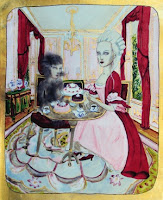 Scene IV in The Ballad of Baby Doe is an out and out battle. Augusta and Baby Doe's words and actions towards each other are unkind and unrelentless.  To be able to play this scene truthfully, we need to play not the anger, but the woman. Here are my thoughts about getting to the heart of these women.

In the July edition of Red Magazine, a style challenge was set: Can real women wear colour? I’m sure I was meant to be considering if I could carry off tangerine orange, canary yellow or lime green. Instead, I found myself asking the question, what is a real woman? As the article didn’t provide me with a definition, I was left somewhat dazed and confused. Although I feel like a real woman, neon pink remains a challenge to my complexion – well more of an assault really - but does this make me more or less of a woman?

This questioning of my femininity prompted me to think about the battle between Augusta and Baby Doe in Scene IV of The Ballad of Baby Doe.  Just as I had felt judged against a set of criteria that I wasn't in agreement with, so is Augusta Tabor.

In the 26th year of Augusta and Horace's married life, Horace changes the definition of what he wants Augusta to be.  He wants her to be the nineteenth century's model of a real woman.  The problem is, Augusta has been working outside of these parameters all her married life.  She cannot suddenly become a doll, a damsel, when all her married life she has been the heroine.  But Horace, in his second springtime, is determined he wants a damsel to make him feel a hero. So he gives up on Augusta and turns his attention to a woman who is the perfect damsel in distress, Baby Doe. With her identity and marriage crashing around her ears, what does Augusta do? She stands and fights.

In Scene IV, the Augusta and Baby Doe scene has a peculiar feel of the Clash of the Titans; two remarkable women, rivals in love and thought, coming face to face for a bit of a square off. As youth opposes age, the battle that ensues is a dirty one: one woman’s femininity pitted against another’s. But what is the ultimate power? Is it purely a matter of true love? Or, is it also about self-preservation - the need to secure the future you have been groomed for?

The Battle of Horace Tabor is a well fought battle. On one side is the Maiden, Baby Doe, a breathless symbol of youth, beauty and love. On the other side is the Queen, Augusta, a vision of age, wisdom and love. Despite the archetypal and generational differences that fuel this battle, these women also share similar characteristics. They have strength and determination. They love the same man. They challenge the nineteenth century patriarchal social constructs of femininity; one is an entrepreneur, the other a divorcee. But it is their differences that are at the heart of their battle and it is this conflict that drives the scene.

The origins of their differences date back to their childhood. If Baby Doe was groomed to wear glass slippers, Augusta was groomed to wear canvas shoes. From this grooming came the foundations on which they would later explore their femininity. Baby Doe and Augusta’s individual understanding of what it is to be a woman are worlds apart. As they face each other in the confrontation duet of Scene IV, a princess in the making vs Little Red Riding Hood, their sense of identity comes into question as each woman judges the other by her own set of parameters. Augusta has little respect for Baby Doe’s particular brand of femininity. She views her reliance on sexual currency with contempt and considers it degrading. I wonder if Baby Doe thinks that Augusta’s use of intellectual currency is more masculine than feminine and therefore perceives her as less of a woman.

This relationship between femininity and identity and how it is used to survive in a man's world, is something that has played out across history. Elizabeth I did it.  Queen Victoria did it.  Even Margaret Thatcher did it.  And now we look at how Augusta and Baby Doe did it.

Augusta finds her voice in a man’s world by taking the woman's traditional role as a home maker and spinning it into a business that amasses the family a good nest egg.  In doing so, she becomes a female entrepreneur and ultimately, a pioneering woman.  But there is a cost. In order to survive, Augusta has no other choice than to get down and dirty - smashing rocks to build a home, farming with her bare hands and climbing mountains to find a home. To put it another way, this middle class woman with middle class sensibilities rolls up her sleeves and does the work of a working class man. As a result of using her body like a workhorse, her soft facial features become hard and pointed whilst her slender female hands twist and crack through years of labor.

In contrast, Baby Doe finds her voice in a man's world by being the nineteenth century's ideal of a real woman. Unlike Augusta, her skin is soft, her hands are slender and her youth and fertility light up the Denver streets. But she too has had her lot to bear; an abusive marriage, a divorce and the tragedy of her stillborn baby boy must have taken their toll on how she felt as a woman. Her mother told her that she deserved a man 'so rich, so powerful who could give her anything and make her like a princess.' By the time she arrives in Leadville in 1880, Baby Doe isn't really living up to the expectations of her mother's grooming. Indeed, she's in minus figures. So when Horace and Baby Doe meet, they legitimise each other.  Baby Does makes Horace feel the hero, and he makes Baby Doe feel a princess.

So through nature and nurture one woman becomes pioneering, an accidental feminist. The other a social trophy with a touch of today's "Don't Cha". I wonder what Red Magazine would make of this? Which woman would they choose to be the real woman and test if she could or couldn't wear colour? As for me, I’m pretty certain that both women are real women, because all women are. Perhaps I have this liberal view because I am the owner of a bright red coat. Whether that makes me real or not, who knows.

But one thing I do know for certain; femininity - it’s personal.  Anchor into this aspect of Augusta and Baby Doe's identity and Scene IV will crackle, because the audience will understand and feel every word you sing.