Daily Specials at the V&A 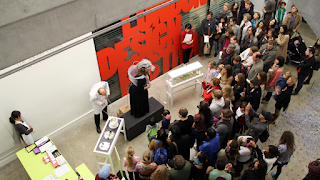 On the 22 and 23 September 2012, The Algae Opera made its world premiere as part of the Design Festival at the V&A. Thousands of people came to 'dine' with us and step into the future.


Over the last six weeks I’ve been working on a new piece called, The Algae Opera.  This piece of performance art imagines our world in 2060 where algae is the new Sunday Roast; the dinner plate the new opera house. From stage right enters the algae opera singer, Evalga.  We watch as she is transformed with biotechnology to grow algae with her breath. As she sings, her symbiotic suit captures her breath to grow the algae for us to eat.

In this future scenario, The Algae Opera does not envisage opera as the traditional high art form we understand today. Rather it imagines opera as a breath ceremony that manufactures a future food: ‘imagine how our bodies in the future could be re-designed to eat differently, and how new rituals of eating will create alternative relationships with the ‘producer’ and enhance the sensory experience of eating.’ (Burton and Nitta).

In this imagined future, song becomes a tasty experience, a political ambassador.  Musical form and systems shift to represent life in the Algae Age: ‘an imaginary 'folk' music, born of a Human/Algae symbiote culture where breath itself is the revered symbol of existence.’ (Gameshow Outpatient)

Because this is such an extraordinary project, Current Song of the Day has opened the rehearsal room doors so you can have a peep inside.
For those thousands of people who 'dined' with us, here is a memory of the menu you sampled: 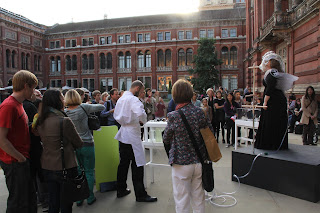 The songs were specially selected for the V&A to reflect the issues of the day.

Course 2: Bitter
This contrasting course featured a song about consuming the talents of another person and how a performer can become trapped by the expectations of the audience. 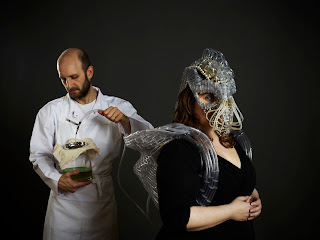 The Algae Opera's world premiere happened on
22 and 23 September 2012 at the V&A Museum, London. Performances were on the hour from

Following the world premiere, the Algae Opera was a lead feature in Wired, Huffington Post and Animal.