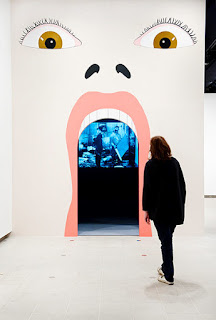 A design proposal for the 21st century singer...

Poirot move over. I have a new intellectual crush. It’s Jeremy Deller. Not only does the man have a great taste in scarves, he has an understanding of people that leaves you all of a quiver. When I go to see a Deller exhibition, I'm struck by the companionship between his art and his audience. He is a master at creating a multi-sensory experience that invites the audience to explore and adventure.

The opera house and the concert platform I would argue are also multi-sensory experiences.  But often the audience is viewed from the perspective of an over-sized ear. New research into how we communicate through music indicates that the visual aspect plays a significant role in how we receive live music. Couple this with the evolution of 3D television, immersive performance arts and the rise of visualisation, how will classical singing, with its the reliance on the ear, find its place in this new renaissance of a world we are living in?

Multi-sensory
Singing is a multi-sensory experience. We don’t just hear the singer - we see and feel their breath, their vibrations, their thoughts, their emotions, their character. The Algae Opera takes this one step further by encouraging the audience to also taste song. Whether the song or opera repertoire is traditional or exploratory, this performance paradigm suggests that the audience is not just an ear. Rather, they are a journey companion who understands and experiences the song by consuming the singer. And like the singer, they use their whole body to receive the song, just as the singer uses their whole body to communicate.


Seeing is believing
Mehrabian's research on how we communicate reveals that: 7% is words, 37% is vocal sounds and 55% is facial expression and body language. This means we are largely programmed to listen with our eyes. A recent report on classical music (published in the PNAS journal) further highlights this idea in its investigation into the role of vision in classical music. It's conclusion was:

'People consistently report that sound is the most important source of information in evaluating performance in music. However, the findings demonstrate that people actually depend primarily on visual information when making judgments about music performance.' Sight over sound in the judgment of music performance, Dr Chia-Jung Tsay, 2012.

Couple this scientific research with cultural patterns we can observe from our sofa or cinema seat - 3D storytelling, reality tv, epic, fantasy and hyper-reality films - a problem emerges. Opera deals with these very themes of fantasy, reality and epic storytelling. So if people can emotionally respond and cope with these epic stories in their lounge or local cinema, how come the same themes fail to pull them into the opera house?

There are a variety of reasons for this lack of resonance. Some of it is learned, some of it is cultural, another part is economic. But the bit that interests me is the emotional factor. If opera continues to be held hostage by La Voce, where the overall performance practice defies the suspension of disbelief, the emotional gap between the opera house and the people will just keep getting wider. No matter how big the canvas, the character, the situation, people need to see and hear an emotional truth. So the question is: How can opera and art song future proof itself against a society that listens with its eyes more that its ears?

Joining the dots
Some opera houses have started to respond to this problem with wonderful visual sets that amaze, and cross collaborations with film directors and immersive theatre companies.  And this is an important and necessary step.  However, my approach lies in performance practice and requires a bit of time travelling... Just over 90 years ago, the acting practitioner and all round guru of 'being', Stanislavski, turned his attention to the genre of opera and classical singing in the latter years of life. His approach was a simple one: nurture truth in operatic and concert performance by 'combining the art of living a role with the technique of singing.'

This joined up approach, where sound and vision are built together, plays a significant role in the redesign that will help classical singing evolve as a communicator and develop their audience reach in the 21st century. It's a redesign that requires acting and singing to be built as one unit. It heads towards a world where there is no longer the singer and the singer actor. This is a world where every singer is built as a singer actor. Where acting and singing training runs in parallel. Where both are as important as the other because at the end of the day, opera and song reveals a human story.

'Classical music training is often focused on improving the quality of the sound, but this research is about getting to the bottom of what is really being evaluated at the highest levels of competitive performance. We must be more mindful of our inclination to depend on visual information at the expense of the content that we actually value as more relevant to our decisions.' Dr Chia-Jung Tsay, University College London, December 2012)