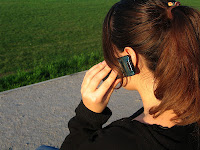 In November 2011, I performed the mezzo role in Carpenter's, One Million Tiny Operas About Britain, for RLPO's Ensemble 10/10.  Here I exhibit my thoughts on one of the tiny operas, Opera 58.

When you talk on your mobile what dance style are you?
It’s amazing isn’t it, what our bodies do when we are on our mobile in the street, in the park or on a bus.  Between you and me, most of the time I’m a bit of a rocker.  And sometimes, if I’m talking about something a little salacious, I become the waltzer.  In Opera 58 of One Million Tiny Operas About Britain, the woman with the mobile is most definitely a waltzer, and boy does she have a lot to waltz about.

Opera 58 is remarkable in that it captures not just the woman on the mobile, but us the listener.  The character of the opera is called woman on a mobile making Opera 58 the only tiny opera that doesn't name the character.  She isn't a Ruth, a Sandra or a Clare - she's just a woman on a mobile.  And this makes her an Everywoman; she could be you or me.

Her conversation is provocative and philosophical.  She tells the story of her friend’s hen night where a fireman strip act is the main entertainment.  As the woman's story unfolds, we realise that her feelings about the bride's purity reminds the woman of her own set of impurities which she’d rather not face.

Opera 58 is set in three four time. As the opera waltzes from bar to bar, a casual sensuality emerges.  This waltz, when coupled with the slow shifting harmonic structure and a curvaceous modal melody, hypnotises us.  In this soundscape we find not just the character of the woman on a mobile, but also ourselves as listeners.  You know you’ve done it - listened to a phone conversation when you shouldn’t have. So in this moment of voyeurism what are we as listeners doing?  Judging morality, fantasising and wishing it was us, or re-living the past?  Whatever we are doing, we play a role and for a short moment of time, we are complicit.

As her waltz draws us in, your world and her world meet. The woman's world is upside down.  She’s a little bit broken.  Her own hurt is driving her to judge others. And whilst we escape into the salaciousness of the situation, ultimately her unhappiness leaves us reflective.  But what about your world?  If the woman is escaping from something she doesn’t want to face.  What are you escaping from as you listen in?
Labels: Characterisation Future Proof Gary Carpenter Opera Repertoire