To have and to hold until your ego takes over

When I was working on the Tabor duet in Scene III of the Ballad of Baby Doe, I discovered it was very easy to just play it angry. But if you play it this way, you lose the power games of the scene; the stuff that keeps the audience on the edge of their seats. So to make sure the twists and turns of the argument were captured, I decoded the score to work out how its dots and dashes, shrieks and pleads revealed the breakdown of the Tabor’s marriage. Here are my thoughts...

One thing I've noticed when sitting in the nation's coffee houses is the argument style of couples. Some couples hide their furrowed brows and urgent whispers behind venti coffee mugs. Others are not so diplomatic and bellow their accusations and tearful pleads across well frothed lattes and perfectly percolated americanos. Then there are those couples who cover up their barbed blames with fixed smiles and a carefully executed cake eating ritual.

Horace and Augusta's style in Scene III of The Ballad of Baby Doe doesn't involve fixed smiles, urgent whispers or tearful pleads. There's no cake and there's definitely no coffee. It's an out and out barney as we say up north. Their arguments are verbally vicious. Neither holds back on insults and both understand just what buttons to press at what time to ensure the disempowerment of the other.

Horace and Augusta's duet in Scene III is based on a cat and mouse structure. It begins as a classic couple's argument - I've done all this for you and you haven't appreciated it - which is levered into the exposé of an affair. As resentments are voiced, ego matches ego and neither relents. The result is that Augusta and Horace end up backing themselves into a corner with only one option out; the emergency exit.

The beginning
For Augusta, the duet begins with the thought that exists between the end of her aria 'not like hers' to the moment Horace enters and the first note of the duet is played. In this transition point Augusta is deflated; her husband is having an affair with a woman young enough to be their daughter. As Horace enters, Augusta does what any strong woman does; puts on a brave face. The inner monologue that is created in this moment drives Augusta's opening line and sets the scene for the argument ahead by ensuring that the end of the duet isn't played at the beginning.

The opening bars of the duet belong very much to Horace and the depiction of his pompous hustle and bustle.  Augusta's initial reaction to Horace can be found in the spiky ostinato passage which fixes on pedal C. Her opening line juxtaposes against Horace's sound world, further establishing her isolation. In the second part of the phrase the spiky ostinato returns as she mobilises herself for battle. It's a simple question she asks, 'What are you looking for Horace, perhaps I can help you find it?' The thrust of the melodic structure is scalic with the ascending and descending phrases contained between a sixth. When combined with the operatic piano, this creates a sense of forced emotional control and paints the image of a woman who is orientating herself following an emotional kick in the stomach.

Augusta's first battle strategy is one that helps her reclaim her identity as a wife and a woman. Vital if she is to retrieve the confidence she's lost at the hands of betrayal. She begins with a simple cat and mouse strategy, I have something (the cheque) that you are looking for. This battle ends with a melody made up of an ascending scale with a crisp dotted rhythm that asserts the major key.  Augusta now has her battle armour on and she's ready for a fight.

This cat and mouse structure continues throughout the first section of the duet.  Horace doesn't take the bait, not even Augusta's brazen prod of 'I'd like to know more about your personal affairs.'  But Augusta is determined to prod the truth out of him, and it comes in one brilliantly delivered jibe.

After Horace has given his political speech about how the Tabor Empire was built on his entrepreneurship, Augusta is left smarting with emotion. Her knocking like fate motif returns, prevalent in her previous aria, and in doing so it pushes the scene in a new direction. 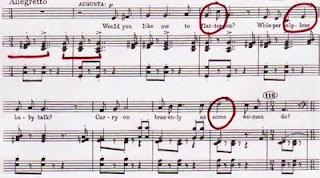 Responding to his jibe, she turns to him with an unnerving calm and sets about diminishing his argument with three careful prods. All the prods use an ascending or descending pattern which represent the thought behind them.
Prod 1 - ascends to ensure that 'flatter' is given the power it needs to sarcastically introduce Baby Doe.
Prod 2 - a descending melodic structure used to arrive at the word 'helpless'. This is the lowest point in the melody and reveals much about Augusta's perception of Baby Doe.
Prod 3 - if the last two prods were aimed at unnerving Horace, this prod is quite frankly, a slap around the face.  It's a strong and relentless melody rising towards 'some' which mobilises her strength once more, verbally slapping Horace around the face with a great big hint.

This time Horace takes the bait. His reply is the only section of the duet that is unaccompanied, the sparseness of this texture reflects his uncertainty: 'What women Augusta? Stop looking so mysterious.' Augusta has him on the back foot. This is the moment the audience have been waiting for. 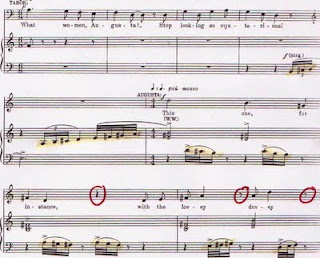 Many of us recognise the moment when our partner is doing a cover up. We feel it in our stomachs and the injustice of it travels up through our body until we are left gasping for air.

Augusta's reaction to Horace's cover up starts low in her body with the ascending rumbles of the strings. When confronting him with the evidence of the affair: 'This one for instance with the lovely, dovey hands', an arpeggio like structure rides above the strings rumblings, its angular melody capturing the rawness of her emotion. The rests in between these short power phrases are indicative of the emotional surges that force us to catch our breath and deliver our words as emotional splurts.  And then finally, the moment we've all been waiting for....the naming of the other woman. Twisted with contempt and hurt, Augusta announces Baby Doe with a descending melody that arches symbolically to a deceptive cadence.

With the reveal of the affair, Horace and Augusta clamber to secure their ego. Horace needs to stabilise his ego after being found out and Augusta needs to restore hers from the rejection of betrayal. The scrabble in the orchestra reveals the impetus of these needs and now the sound worlds of Augusta and Horace clash against each other.  As their egos battle to survive, the clash of their sound worlds reflect their argument moving away from 'us' and centering on 'I'.

Augusta first accuses in melodic structures that crow patronisation: 'So you've been seeing her.  So you've been giving her presents.' When Horace shrugs off her accusations she retaliates with a spitting judgement call whose bass line seethes with the rumbling of her pride: 'It's revolting, it's disgusting, for a man of your age Mr Tabor.  Won't you realise your position if you won't give heed to mine.'

Horace begins his counter attack by comparing Augusta and Baby Doe in a romantic melody. The juxtaposition between the beauty of the line and the cruelty of the comparison strikes to the core of Augusta's ego. Then he goes in for the kill by suggesting that Augusta's coldness forced him into the arms of another: 'You should be ashamed of the coldness which divides us. What's the use of living when you're already dead.'

When levelled with that sort of accusation, there are ultimately two ways out: cry or fight. Augusta chooses to fight. The final section of the duet is a right old ding dong of an argument. It's that classic moment when white rage takes over and all that drives you is putting right injustice and reclaiming the ego.

The thing about white rage is that you don't hear, you don't think, you just feel. Consequently, the strength of her wide and arching melodies mean that Horace can't get a word in edge ways. She doesn't hear his interjections, she's too busy mobilising for her next battle, confronting Baby Doe: 'Just let her try to wreck my life. I'll drive that woman out of town. Even if it means the ruin of you and me as well.'

This final section is one big battle plan broken into objectives and outcomes. Her Joan of Arc like melodies contrast with Horace's squawks and the only time she really hears him is when he apologises - which she doesn't accept.  Horace is scared, he should be. He's just handed all the power over to Augusta.

Arguments are fascinating aren't they, because they show the beast within. When we argue we reveal just what demon we've created to safeguard our ego. Sadly for Augusta and Horace this argument was the point of no return. A year later they were divorced. This marriage never set out to be about egos. But their need to survive became an ego battle and when the marriage is the battlefield, destruction happens from within.

Life is very short and there's no time for fussing and fighting my friend.
I have always thought that it's a crime, so I shall ask you one again -
Try to see it my way.. (The Beatles)

References:
The Ballad of Baby Doe; Moore-Latouche - Chappel; 1958
Augusta Tabor: Her Side of the Scandal; Caroline Bancroft; Johnson Pub; 1972
The Silver Queen; Jane Coleman; Leisure Books; 2009
We Can Work It Out, Lenon-McCartney; 1965
Labels: Interpretation Ideas Opera Repertoire The Ballad of Baby Doe