Augusta's dramatic scena of Scene III in The Ballad of Baby Doe is a formidable piece of drama. The singer is left alone on stage with a wide canvas of vocal lines and some astonishingly tricky acting bits. It’s tricky because the scene can easily become clichéd if the singer only plays the emotion and not the woman. To start to join all the dots of the scene, here are my thoughts on how to find the brutal truth of Scene III.

I always think an epiphany can only ever go two ways; you either end up rejoicing or despairing. Unfortunately for Augusta, her epiphany in Scene III is total despair, with anger, resentment and pity thrown in for good measure. And therein lies the danger of this scene. The emotional stakes are so high that the singer can be easily persuaded into just playing the emotion. But it’s not the emotion Augusta is playing in this scene. It’s her want – the one that she’s been battling with all her married life. And it’s this want that drives the emotional power of this scene and her given circumstances that provide the emotional backdrop. Connect to the given  circumstances and Augusta's want, and you’ll connect to the audience.


Back history
It is so important for the audience to empathise with Augusta in this scene - they need to feel her vulnerability and witness the injustice of the situation.  If they don't do this here, the singer has lost the chance to portray Augusta with the respect her pioneering achievements so deserve.
The first step to respectful portrayal is to understand the given circumstance by taking a long hard look at all 26 years of the Tabor marriage. For further help on this, go to this article. Once the back history has been built, the singer can start to trace how the given circumstances of Augusta's married life is symbolised in Scene III's sentimental lyricism, heartbreaking speech patterns and Puccini like melodies.

Through this detailed work the singer is able to anchor into the given circumstances and play Augusta's want.  So when the singer sings about breaking rocks to build a home it is no longer a set of words, but a past event that directly resonates to the given circumstance Augusta currently finds herself in.  Or in more human terms, she revisits the past to make sense of the present and the future.  . 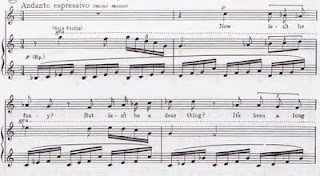 The given circumstances and the score
In the dramatic scena of Scene III in The Ballad of Baby Doe Augusta finds a pair of lace gloves that she first mistakes are for her.  She considers them a peace offering from Horace; in her mind he's bought her some lovely gloves, presumably so she can cover up the work-torn hands that embarrass her when attending social engagements.  Working with this logic, the gloves are a sign that he's ditching the young girls and now wants her to stand next to him as his wife.  She sings with a gushing sentimental line as the gloves become a symbol of hope for the reconciliation of their battered marriage. 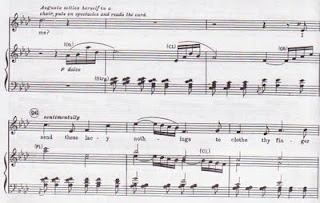 A romantic note is attached to the gloves.  As she reads the note, the melody line soars with hope and sentiment and she is transformed into a lovesick girl once more; the vocal flutter of descending semiquavers revealing her breathless excitement. But there is something uncomfortable about this arioso. Something isn’t quite right. Although each thought rises, it quickly descends. The sense of forboding this melodic structure creates is soon understood when Augusta realises that the gloves and accompanying note are intended for Baby Doe. 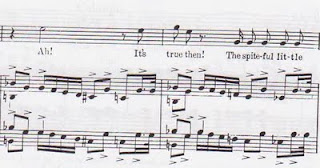 Freud interprets gloves as the representation of female genitalia. I'd bet at least £5 that the gloves Horace bought Baby Doe were too small to fit Augusta’s twisted hands. As Augusta discovers the betrayal, the gloves quickly transform into a symbol of despair.  The gloves are no longer indicators of a possible reconciliation, rather a possible separation.  The semiquavers now attack, representing the biting pain of betrayal and Augusta's fear for the future. 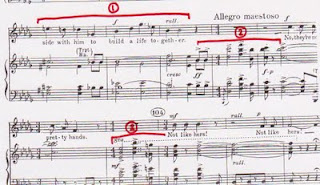 The gloves remind Augusta of her failings; her lack of passion, lack of beauty, lack of womanliness. All the things the wilderness beat out of her. She looks to her own socially unacceptable hands. Every callus, every scar and every wrinkle maps out the self-sacrifices she made: the callus on her thumb from breaking rock to build a home, the scar from defending her baby in the wilderness from a rattlesnake. Now these marks carry a new meaning - not the triumph of celebrating a well-earned life together, but the futility of her marriage to a man caught up in status, vanity and mortality.  A soaring Puccini line (1), reminiscent of those we heard in "I send this lacy nothing" returns to demonstrate the bitterness of her rejection.  The declamatory motif used earlier to represent the tragedy of her hands, "look at my hands" returns as a mocking reality check(2).

Final thoughts....
So the truth is in the hands. Well, people do say that your life is mapped in your hands. Which proves that this scene really isn’t just about the notes or the emotion; it’s also about the hands. Those hands become a symbol of the given circumstance and her want.  Every time I rehearsed this scene, a lyric from Into the Woods kept haunting me: 'You may know what you need, but to get what you want better see that you keep what you have'. It’s a simple idea but a hard lesson to learn at any stage of life. If only Horace and Augusta had managed to keep hold of what they had, there would have been no need for lace gloves.