In a few weeks time I am performing a recital called Love Life and Art at The Actors' Church, Covent Garden, London.  Here are my thoughts on the opening song: Purcell's 3rd setting of If Music be the Food of Love...

The other day, I was listening to a friend talk about her man of the moment. Actually, between you and me, this moment has dragged on over a few years.  She’s never been on a date with him, but she really likes him and she thinks, kind-of, sort-of, that he might like her.

Over a latte, I watched her ride the rollercoaster of Cupid’s arrow. In one sup of frothy milk, she thought that it might be unrequited love and plummeted into deep despair. Her life was over. In the next sup, she remembered that the other day they sat very close to each other and their hands brushed. Would I be her bridesmaid?

My friend is in her mid-thirties; successful, intelligent and most of the time, fairly rational. Her story is not unique. It plays out every day in playgrounds, coffee shops and the photocopying rooms of corporate empires. It is not a modern story, though it is the modern dream - it’s accessible to all.

At the end of our lattes, my friend said that she hoped her man of the moment would not break her heart. I enquired if he knew he had her heart to break. She laughed and said, “Of course not!”
“Well, what would be the point in that?” I joked.
As I said, my friend is a rational woman, honest.

In that one moment, the game was revealed. But why play the game?  Is it because we secretly enjoy self-inflicting pain which in turn creates a pleasant distraction from life’s monotony?  If so, it would have been a far easier game for Adam and Eve to play than the apple one. But whatever the answer, play it we do.

When I came to programme the songs for Love Life and Art, I rifled through my shoebox of songs to come across Henry Purcell’s third setting of If Music be the Food of Love. Composed in 1695, the song introduces a protagonist who is in the same situation as my friend.  To capture the changing thoughts of hope to despair and passion to paranoia, Purcell uses a through composed song structure. Here, each section of the song introduces a new tune and with it, a new thought.  This is a genius choice of song structure, for in mirroring the protagonist's storytelling of contrasting thoughts presented in a linear way, the psychological truth of character and situation is perfectly captured: 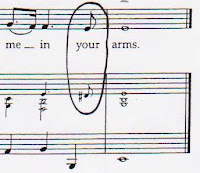 Putting lattes and through composed songs aside, let’s get down to the nitty-gritty. Are we dealing with unrequited love here? In the Purcell song, sadly, I think we are. At the end of the song, the protagonist sings, "Sure, I must perish by your charms, unless you save me in your arms." As the circled bit of the music shows, the song ends with an unsettling clash between the melody and accompaniment on the word "your arms." One can only think that Cupid’s arrow, in this circumstance, isn’t leading to the much hoped for happy ever after. As for my friend, I think we have a few more lattes ahead of us before we find the answer to that question.